We made the short trip to York on the afternoon of 21st June leaving a couple of hours spare to have a walk around and something to eat before heading to The Grand Opera House to see The Orchestra.  As I’d heard about the gig early enough I’d managed to get front row tickets.

I’d been a big fan of ELO from the early days since I heard Mr. Blue Sky for the first time in 1977 – a blue vinyl copy played at a school friend’s birthday party.  Since then I’ve bought just about every album I could but I’d never seen them play live in any of their different line-ups.  This was a first for me.

On entering the Grand Opera House, we found out that Kelly and Hux would be appearing to sign merchandise at some point so we hung around that area.

We weren’t to be disappointed.  Having initially bought No Rewind and Kelly’s self-titled album, I got the latter signed by the man himself.

I then approached him again and apologised for bothering him for a photo.  Kelly said it was no bother at all and we posed for a picture and he told us to enjoy the show. We then met Hux and got another photo with him.

The gig itself started at around 8:45pm, following the warm up by Dean Johnson from Liverpool; a great guitarist/singer who described himself to those at the back as a cross between James Nesbitt and Robert Plant.  Apparently, because of his origins, at one point Mik Kaminski had jokingly accused him of nicking the wheel’s off their spaceship :O)

The band opened with Evil Woman and then proceeded to knock out all the other favourites from the past with relentless enthusiasm, including Mr. Blue Sky, Turn To Stone, Sweet Talkin’ Woman, Wild West Hero, Ticket To The Moon (included in the set after it was a big success in Russia), Roll Over Beethoven, Rockaria, Ma Ma Ma Belle, Shine A Little Love and a really spine-tingling solo acoustic version of Midnight Blue by Kelly.  The guys were clearly enjoying themselves on stage as they were carried along by the keen sell-out audience.

Kelly's incredible vocal range is still there after over 30 years in the business and with the traditional accompaniment from Mik Kaminski and his trademark blue violin, plus the superb talents of Eric Troyer, Parthenon 'Hux' Huxley, Louis Clark and the powerful drumming of Gordon Townsend, this is a very strong musical package not to be missed. The ELO sound is still very much alive and well.

Intertwined with the well-known hits were a few tracks from the latest album, No Rewind, including The Orchestra’s new interpretation of Twist & Shout beginning with a brilliant violin intro. from Mik Kaminski.

After nearly two hours of incredible music, we came to the traditional encore of Don’t Bring Me down.

As with other gigs, Kelly had the whole audience on their feet singing along, repeating the chorus until he was happy that we were all making as much noise as possible.

All too soon it was over.  An incredible night’s entertainment and well worth the money.

A few of us gathered outside the stage door afterwards like aging groupies, waiting for the band to leave.  Through the glass of the door we could see Kelly, Mik and Louis wandering about inside, sipping wine, etc. but shortly after that Hux appeared outside, followed by Eric and then Gordon.  They were quite happy to chat and sign autographs.

No appearance by Kelly, Louis or Mik this time – either they were shy or they knew what we were like !

Even now as I write this four days later, I’m still buzzing from the experience.  They say that some bands improve with age and this is the case with The Orchestra.

Roll on the next tour – we’ll be there for definite. 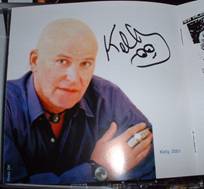 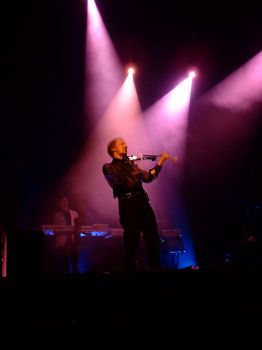 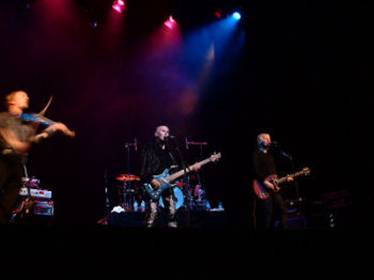