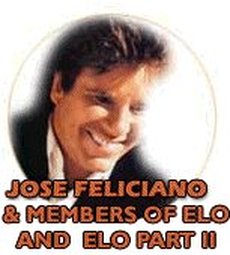 This is my review:

There were two sets at 7pm and 9pm with only a short break of only a few minutes between them, and there was a very special guest: Jose Feliciano!

Interestingly, there was a young woman onstage signing for the hearing impaired, even during the instrumental bits. There were some musicial surprises, including "Over London Skies", which I hadn't heard of at the time.

The first set opened with an instrumental which I can't place ("Fire on High", actually), then led into "All Over the World". The band came remarkably close to pulling off the high notes in "Xanadu", which was part of a medley with "Living Thing" and "I'm Alive".

Still, I'd have to say that "Turn to Stone" was the crowd favourite. The whole band sounded great, but Eric especially was in top form.

After being hailed as an "icon of music" by Kelly, Jose Feliciano came on stage and played "Last Train to London" with the band. "Light My Fire" and a few other solo efforts by Jose were followed by rollicking renditions of "Roll Over Beethoven" and "Don't Bring Me Down".

As always, Kelly was the consummate showman. I was delighted to see people of all ages letting themselves go and having fun, especially during the first set when the theatre was almost full.

The only thing that could have been better was the sound system although I'm guessing this wasn't ELO's fault.

A few too many songs may have been repeated during the second set, but then again maybe they didn't count on people staying for both. In any event, the band was as alive as ever, and I'm confident they'll be around for a while to come, no matter what they call themselves.

More details can be viewed at - http://www.ocfair.com .