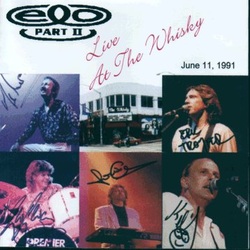 I have just obtained a copy of this particular live concert which was recorded at the Whisky-A-Go-Go Club in Los Angeles, California on June 11th 1991. This was in fact ELO Part 2's first live gig in the U.S.A. following shortly after the concerts with the Moscow Symphony Orchestra at Birmingham's NEC in the U.K.

The atmosphere at this gig is captured superbly with the audience very enthusiastic throughout. The sound quality is by far the best I have come across on this type of 'unofficial' live recording. I suspect this is due to it being recorded professionally by the local radio station.

The concert kicks off with an introduction by the compere and the band start off with the classic 'Turn To Stone'. Next up it is 'Evil Woman' with superb vocals from the whole band including Neil Lockwood and Pete Haycock.

The next two songs are from the groups debut album, firstly my own personal favourite Part 2 song, 'Thousand Eyes'. The audience reaction to this superb song was rapturous and I suspect with better promotion, this would and should have been a massive hit for the band. The next new song is 'Every Night' sang superbly by Neil Lockwood.

'Don't Bring Me Down' then brings the audience paticipation to its peak with Kelly urging the audience to dance and sing along. Another two new songs 'Heartbreaker' and 'Easy Street' quickly following to take us into a short break.

The next part of the gig features a medley of classic ELO hits '10538 Overture', 'Wild West Hero', 'Sweet Talkin' Woman', 'Confusion' and 'Do Ya'. The concert then finishing off with a couple of classics, 'Rockaria' and of course 'Roll Over Beethoven'.

My overall thoughts on this recording are that it is a must-have for any ELO and especially ELO Part 2 fan. The sound quality and atmosphere captured by the recording is by far the best I have come across up to now (and that includes even the brilliant One Night Live In Australia official release!!!!).