Hi fellow ELO fans, here is my review of the ELO Part 2 concert held at the the Royal Albert Hall, London on Friday 28th May 1999.

Right then, where should I start?? Having finished my course and picked up my hire car in St Albans (about 30 miles north of central London), I parted company with my work colleague who had a wonderful 320 mile journey home to Carlisle to look forward to!!!

After stopping for a bite to eat, I set off at about 4:30pm towards London. After a quick tour around a few of the 'sights' (Buckingham Palace, Marble Arch, Park Lane, Notting Hill!??!, etc), I eventually arrived at Imperial College car park which is situated just behind the Albert Hall.

Having parked up, I set off with my bottle of Fanta and went and sat on the steps leading up to the Albert Memorial which is straight across the road from the Albert Hall. With clear blue skies and the sun beating down, it was lovely just to sit back and take in the atmosphere. As well as the tourists there were hundreds of ELO fans young and old wandering around and chatting.

This was to be my first visit to the Albert Hall and as usual the building looked a lot smaller than I expected - but this was to change when I got into the main hall.

I eventually made my way down to door 8 entrance and once in took the lift up to the third tier where my seat was. I have been to many concerts where I have sat on the front row or near the speakers so this time I decided to book a seat right up at the back of the concert hall.

As I walked through the red curtains into the hall, the view was breathtaking - I could see right around the hall, down to the boxes on the lower levels and the seats on the circle, across to the stage where the band and orchestra were to be and where Barru and the rest of the road crew were busy scampering around doing the final sound checks.

As the audience began to find their way into the hall from the numerous bars and retaurants, right on time at 7:30pm, the lights began to dim down and the Royal Philharmonic Concert Orchestra took their seats ready to perform the Symphonic Beatles. This was followed by a huge round of applause as the announcer introduced Lou Clark as he took to the stage.

I was a bit apprehensive as to what they were about to perform because easy listening / hooked on classics is not really my favourite music. But I need not have worried because it was a superb performance from the opening tune Eleanor Rigby followed by Strawberry Fields Forever. Next was a very strange version of the 'new' Beatles song, Free As A Bird and after a medley of tracks a fantastic rendition of A Day In The Life gained a loud round of applause from the audience. The closing number was Hey Jude which certainly got the crowd warmed up with everybody singing and swaying as the orchestra and Lou were given rapturous applause as they left the stage.

After a short break of about 15 minutes, everybody took to their seats and what an amazing sight this in itself was - the concert was a virtual sell-out with just a few seats on the back row and a few others left empty.

The lights then dimmed down and the opening bars to the Psycho theme started to 'boom' out of the huge speaker system. The audience began to cheer and clap as the silhouettes of the band members could be seen taking to the stage. The lights then flashed on and the band launched into Daybreaker. Kelly and Hux were standing centre stage and half way through the track the pair of them started to take long strides towards the centre microphone, eventually both shouting 'HEY!!!' in unison as the tune changed - it certainly cheered up a few people up at the back of the hall as they burst into laughter.

The set list was going to be virtually the same as on the rest of the U.K. tour except for the band dropping Fire On High, Poker, Whisky Girls and Mik and Bev's solo routines.

After Evil Woman, Bev came out to the front but had to wait for about a minute until the shouting and clapping had subsided before he could thank everybody for turning up and also to thank the road crew and others who had helped set up the tour.

After the Eldorado Overture, the crowd got up onto their feet as they danced and sang along to a wonderful performance of Sweet Talkin' Woman.

Up where I was sitting, as well as the band keeping us entertained there was a woman on the back row dancing and singing away and running along the back row of seating throughout the whole concert. She was eventually joined by half a dozen more on the other side of the hall - it was hysterical to watch!!.

Back to the concert then, and the band put in some excellent performances of Nightrider, Ma-ma-ma Belle and 10538 Overture. Eric's singing plus Hux's excellent guitar playing, dancing and singing were infectious with Eric, Kelly, Mik and Hux having a great time and obviously the crowd dancing and cheering to virtually all the songs had really got the bands adrenalin flowing.

The first hour of the gig finished off with Twilight, Last Train To London (without Jose Feliciano) and then Horace Wimp which has become one of my favourite live tracks (I still do not like the original recorded version though!!).

Lou then left the stage as Kelly, Eric and Hux took centre stage to perform an a-cappella version of Wild West Hero. A loud round of applause from the audience was followed by the orchestra coming back to their seats followed by Lou to conduct them.

The performance then seemed to step up another gear as Midnight Blue, Strange Magic and Showdown followed, with Hux's singing and guitar playing coming into its own.

Lou then played the flute on Pavanne which flowed neatly into Eric singing Power Of A Million Lights. The pace then picked up as the old Move song Blackberry Way got the audience onto their feet again singing and clapping along.

After some amusing scenes as each band member introduced each other, a surprise for most of us there was the introduction of a new song Over London Skies. What a lovely song and is hopefully the first of many NEW songs I hope the band will be writing and recording.

Next up was to be my favourite part of the concert. With many in the audience shouting for Mr Blue Sky, the opening bars of Concerto For A Rainy Day were almost drowned out with an enormous cheer from the audience. Next followed an astounding version of Mr Blue Sky with the orchestra really coming into its own  - the applause for this song alone must have lasted for 2 minutes, it was an absolutely stunning performance!!!!

With everybody now standing up singing and clapping, the band blasted out the hits Do Ya, Hold On Tight, Turn To Stone and finally Rockaria! to end the concert.

As the band left the stage to some amazing scenes of shouting and applause, they eventually came back on to perform an electric(!!) version of Don't Bring Me Down with Kelly urging the crowd on with various chants for us all to sing.

Thunderous applause and cheering then followed as the band took their bows and left the stage as Bev threw his drumsticks into the crowd.

Well, a truly memorable occassion for everybody there (including I suspect the band as well). For me it fulfilled a 20-odd year ambition of seeing ELO perform live on stage with an orchestra - and this was a performance that will live long in my memory. Congratulations must go to both the band and the Royal Philharmonic Concert Orchestra for putting on such a superb show.

And now that it's all over, well I have got a 350 mile journey back home to Carlisle to look forward to!!! (I eventually made it back home at 3:30am in the morning absolutely shattered but I had enjoyed every single minute!!!). 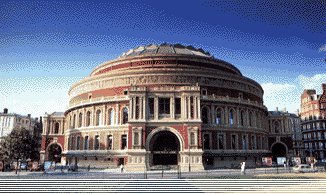 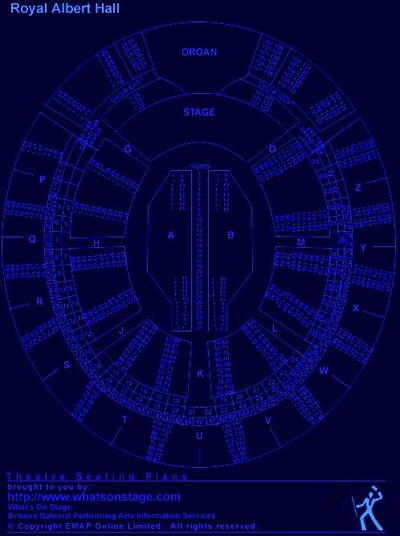 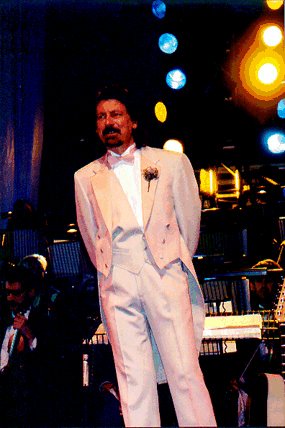 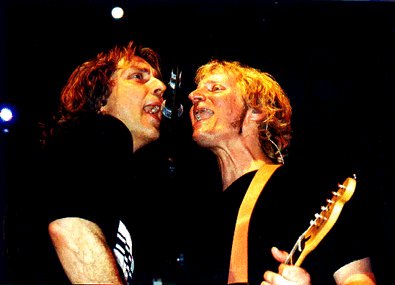 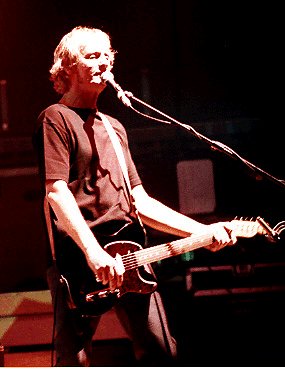 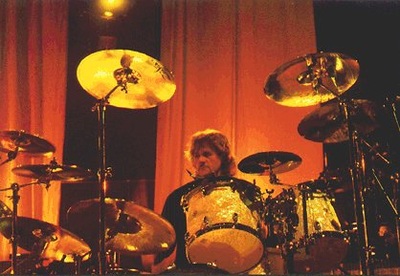 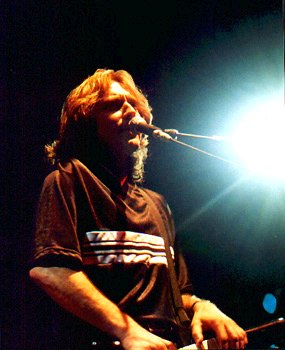 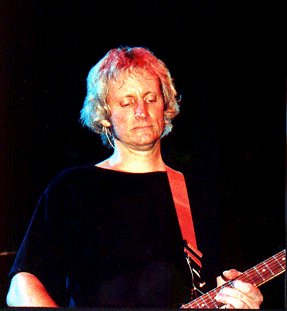 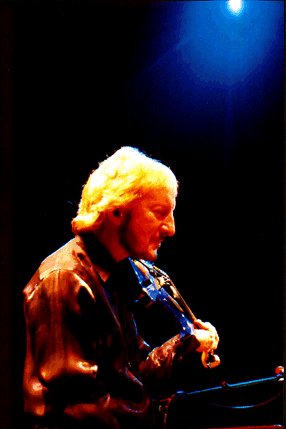 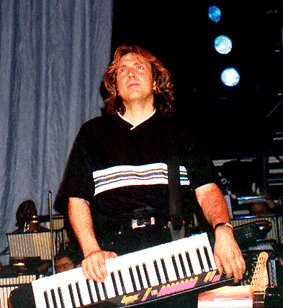 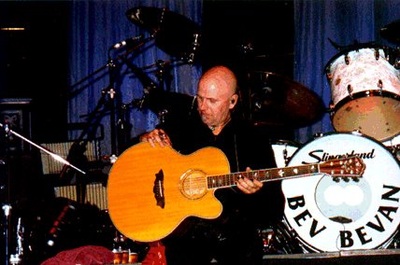