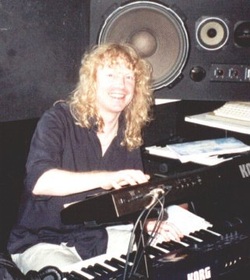 
For those of you who may not have heard of them, Magic are a Queen tribute band, who I've seen quite a few times now, and have been going for 9 years. Originally, they used to do a few other acts too, so at the moment they've gone back to their roots, and the Concert at the 300 seater Palace Theatre was a Beach Boys / ELO concert.

From my front row seat, I did notice that everyone in the audience seemed to be older than me... and I'm 35! The first half of the show was a pretty good run-through of Beach Boys numbers, but after the interval, Magic reappeared, plus a keyboard player (Dave Morgan - I think!) (Dave Chapman actually - JIM), and launched into Twilight. Not bad I thought, but a little lacking in the vocals department. The lead singer has a fairly deep voice, so it didn't really suit the number. After that though, they were very good indeed, and the bass player has a good high-range voice, so with his harmonies, and taking lead on a few numbers, they did a damn good job, with the keyboard player the standout, doing some excellent work reproducing the 70's synth sounds, plus good 'strings'.

Numbers included Telephone Line, Turn To Stone, Hold On Tight, Mr Blue Sky, Don't Bring Me Down, Roll Over Beethoven plus a load more that I can't now remember (my memory's not what it used to be!). Nothing from after Time though. They probably played for about an hour, and got a great response from the audience, who were all singing along. Well worth the ticket price (£13) which, incindentally, didn't say 'Magic' but 'Beach Boys / ELO'. Now if that were true for £13 I think we'd all be happy!!

This was the 3rd night of their tour, and if they're in your area, I'd strongly recommend going along to see them.

All the best - looking forward to ELO2!!