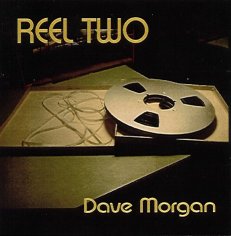 The good news is that Dave Morgan's new album 'REEL TWO' has just been released on 1st March, 2001. The track list is as follows:-

Golden Oldies
Ever Since I Can Remember
Cold City
Modeste (the minor poet)
What Love Isn't
Yes It Is
Mistress Caroline
Perfect Love
Do You Mind?
Please Don't Go
Nothing Says
Go-Getter Lady
The Bit In The Middle
April Flowers
So Handsome
Last Train

Music & Lyrics by Dave Morgan except:
'Modeste' and 'Nothing Says' by Jim Cleary.
'Yes It Is' by John Lennon & Paul McCartney.

More details on the above albums and ordering information can be found at www.scottmorgan.co.uk.
"Reel Two" Review by Alan Heath

Dave Morgan has been around the Birmingham rock scene since the 1960's. Dave's involvement with Birmingham supergroups THE MOVE as a songwriter and the ELECTRIC LIGHT ORCHESTRA, as a band member from 1981-86 are legendary and well documented elsewhere, but his own music is less well known by a wider audience.

Notwithstanding Dave's excellent Christian albums "Call" and "Long Way Home" Dave's last mainstream release was in 1992 when "The B.C. Collection" was released to critical acclaim. That release came into being as a result of an interview with Rob Caiger's fabulous ELO fanzine 'FACE THE MUSIC'. Maybe history has repeated itself as this new collection of songs are released following an interview I undertook with Dave and his wife Mandy for the now defunct ELO fanzine 'KING OF THE UNIVERSE' an extract of which is reproduced below:-

Alan Heath - "Are there any plans to release any of your songs not previously released?"

Mandy - "There's about sixteen stacks which we eat our dinner off! Piles of tapes!"

Dave - "Cardboard boxes that we sit on! I have a few songs that we want to release, they are love songs."

These previously unfinished old demos along with some newly recorded songs now see a release as 'REEL TWO' an album comprising mostly of love songs. Everyone of us are affected by Love on a day to day basis. The songs on this album have successfully captured all aspects of this universal theme.

Whether young or old we all experience the ups and downs and highs and lows of loves full range of emotions, joy, hurt, togetherness, loneliness, bitterness and sweetness and much much more besides.

The opening track 'GOLDEN OLDIES' springs the album into life and from there you embark on a roller-coaster of emotions. With tracks as strong as 'APRIL FLOWERS', 'WHAT LOVE ISN'T', 'EVER SINCE I CAN REMEMBER', 'THE BIT IN THE MIDDLE', 'NOTHING SAYS', 'PERFECT LOVE', and 'PLEASE DON'T GO' (which is a real tear jerker), they will be played over and over again and are going to be remembered as beautifully crafted classics.

The quality of the songs are timeless, the production exceptional and Dave's voice has simply never sounded better than on this wonderful collection of songs.

'MODESTE' (a Jim Cleary song) deserves comparison with ELO's "HELLO MY OLD FRIEND" and the album also has it's humourous moments with 'GO GETTER LADY' and 'DO YOU MIND?' a song so full of tongue in cheek moments, watch out for the sting at the end of the song!

'YES IT IS', is a great cover of this sixties BEATLES b-side, and is arguably no less beautiful than the original. Recorded in an unplugged style the whole track send's shivers down your spine.

The songs on this album all add up to one thing, pure enjoyment. This collection of songs are simply the best collection of ELO-related songs to be released in a long, long time. Enjoy them to the full.