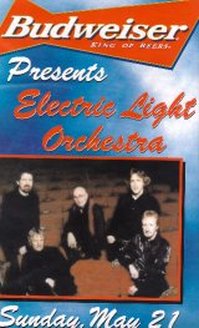 The story starts a few weeks ago. A friend mentioned she heard ELO was coming to Tucson. I had just read about Bev’s retirement, so I did not believe it was true. I was hopeful, so I checked the websites. It was true! Out of curiosity, I continued to listen for any news of the show. There are two rock stations in town. The one that actually plays ELO was not the sponsor of the concert. A station that I have never heard play ELO was the sponsor.  I listened to both stations and neither mentioned the show. I never saw an ad in the paper either. I must mention all this for information of the band and their management. I would have missed this show if I had not heard about it from a friend.

Finally, the day of the show arrives. My wife and I got there very early. There was another couple in line. They said the band just arrived and was in the nearby “Hooters” to get a bite to eat before the warm-ups (those of you not in the USA can guess what “Hooters” means…). My wife rolled her eyes a bit but we went in. We picked a table far from the band. After we had figured that it was the best time to bug them (they were not eating yet). We went over to say “hello”. I was kicking myself for not bringing one of my CDs to sign. We checked my wife purse…nothing. Finally we stole one of the menu cards and had them sign that. I felt bad for bugging them twice. We mostly talked to Kelly and he was pretty nice about it. After we got the autographs we thanked the band.

Midway thru our meal, I check the line. There were only three people in line. After our meal there were about a hundred. I was disappointed that we were not at the front of the line, but we snickered that we had got the meet the band…Surprisingly, we got pretty good seats. We were pretty close to the stage. We came in just as the band finished their equipment checks. After they left, some other roadies a second set of instruments…Oh no an opening act…It turned out to be some group called “Side Jargo”. They were not too bad…but we wanted ELO. When I went to the bathroom I discovered the walls were covered with posters for the ELO show (THIS is how they spent their advertising dollars?!!). After I left, there was one less poster…During the intermission, the local station gave out back-stage passes. I was sad not to win, but pleased I already got to see them in a more relaxed environment.

Finally, the band came on. They opened with ‘Fire on High”. They closed with “Don’t Bring Me Down”. They did all my favorites in the middle. My wife and I were glad to hear “Do Ya”. We really liked “London Skies”. I hope that comes out on an album sometime. I was surprised and pleased to hear “Horace Wimp” and all the “Xanadu” stuff. (It sounded like they dropped Shard End from the list of cities in “All Over the World”). There were a few technical glitches. Kelly stumbled on the words to “Turn to Stone”, but laughed it off.   It was all in all a great show. The crowd really loved it. You could really tell when people got excited to hear their individual favorites. The band seemed to be having fun as well. I wish I had written the exact set list down. All I can say is all the favorites, a few surprises, one new song, and they did not do “Roll Over Beethoven”. Btw:  My wife is pregnant with twins. In a way, this was their first concert…