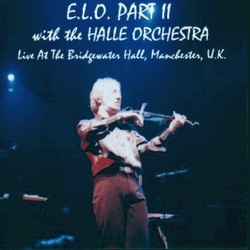 What a great way to spend a Saturday night, at home, beer in hand and listening to my favourite band performing live. This gig featuring ELO Part II with the world-famous Halle Orchestra was recorded by BBC Radio at Manchester's Bridgewater Hall on May 10th 1999.

The concert was the first of two featuring orchestral backing during the recent U.K. tour, the other being the fantastic finale at London's Royal Albert Hall with the Royal Philharmonic Concert Orchestra.

This concert actually started with Lou Clark conducting the Halle Orchestra for a live performance of Symphonic Beatles with the band then coming on stage to perform 8 songs before the orchestra returned for the rest of the concert with the band.

This edited radio broadcast lasts for 58 minutes and features the best of the ELO part of the gig. The sound-quality throughout is superb and the BBC sound engineers assisted by Eric Troyer have done a marvellous job of mixing the sound. Apparently over 80 microphones were set up on stage!!

Richard Allinson starts off proceedings by introducing the band with the first track Turn To Stone. After Evil Woman comes a superb rendition of All Over The World with Eric's singing superb and Bev's drums pounding away in the background.

Bev then introduces the Halle Orchestra and they begin with Eldorado followed once again by Eric singing beautifully on Can't Get It Out Of My Head. After some excellent singing and guitar-work from Parthenon Huxley on Nightrider, the orchestra come into their own with a brilliant performance of Standin' In The Rain and Mr Blue Sky.

Eric then performs Telephone Line, and the audience is then totally confused as the orchestra strike up the chords of One Summer Dream only for the band to launch into Twilight thirty seconds later!!!

A medley of tracks follows - Shine A Little Love, Last Train To London and then a brilliant version of Horace Wimp. The show closes with a rocking version of Rockaria!

Richard Allinson then runs down the members of the band before the band come back for the encore with the now regular show closing Don't Bring Me Down.

Apparently, the band have bought the rights to the complete recording, and hopefully a release of the whole concert will be forthcoming at some point in the future.