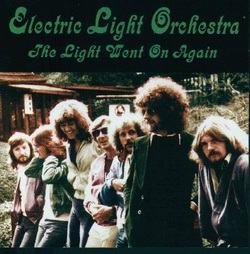 Due to the current interest in live ELO releases and of course the official release of the Live At Winterland cd, I thought I would do a quick review of this 'boot' cd that was released in Germany in about 1993. It is the same concert recorded live at the Winterland in the summer of 1976.

Firstly, a quick explanation as to why this cd is classed as a 'bootleg'. Due to a change in European law during 1993, caused by two well-known male singers bringing a case to ban unauthorised live concerts from being released, then all albums prior to this change in law also became 'unofficial ' releases - including this originally legitimate release in Germany.

When this album was first released in Germany,  because the sound was lifted from the transcription disc you can detect a few crackles and a bit of hiss. But the sound quality has been vastly improved whilst being remastered onto cd. In fact, in my opinion, the sound quality is much better than the official 1998 release of Live At Winterland.

The track-listing is almost exactly the same as for the Live At Winterland release, except the audience reactions have been edited out and also the complete Eldorado Suite is included here with Poor Boy (The Greenwood) which for some strange reason was left off the 1998 release!

The only songs missing from any of the Winterland releases are the live favourites of the time The End / Let's Spend The Night Together which featured on the U.S.  shows at that time.

The sleevenotes for this cd are also superb with a full set list for the Face The Music Tour and also U.K. and U.S. chart positions for all releases up to the albums release.

I can certainly recommend this cd to all ELO fans - it has been so well put together and the sound remastering is as good as that on the Live At Winterland release of 1998.