This is my little review:

First here we have all the songs they played:

It was ten o’clock at night, and the place was slowly getting crowded.

Let me tell you just one little thing about the place: a yard, in the middle of a big building, a typical Madrid building, from the beginning of the 20th century. The yard is charming and the show suited there as you can’t imagine. It was like travelling back through time.

People were coming, all kind of people, longing to see ELO playing live. They have never been to Spain, so this was going to be the first time. In the middle of the show Louis Clark said so, he said: "this is the first time we have played here, so you’re the best". And they really made us feel that way, as we were so lucky to see them.

I think that neither of us expected such a great performance. I mean that we did not expect the collection of ELO’s songs that we have been listening to for so many years; songs that have been growing at the same time.

This travel of time began with a wonderful surprise: the mysterious beginning of ‘Fire On High’. (Oh, man, one of my favourite songs, one of my top five, probably). I could not believe my ears, and I was instantly drawn by the so familiar music. And then, the drums and the instrumental part of the song. Perfect sound.

Actually the sound of all the instruments was perfect during the whole show.

Fire on High is followed by All Over the World, sung by Eric Troyer. I say to myself: this is good, fantastic, two songs and both so well known to me, that I’m anchored in Jeff’s times… and then, Evil Woman, and Showdown, another of my favourites. I turn to my sister and tell her: we are lucky, we can almost conform with these songs and go home.

And then, no more words until the end: just singing and smiling, and thinking: which one will be the best? I wish they played all the songs ever composed by Jeff.

And what an incredible surprise: Can’t get it out my head. I would have never believed that I would forget about the absence of Jeff. Kelly told us that this is one of their favourite ballads, and all the public agrees with him.

The public was totally devoted to their performance. All of us know the songs, the lyrics and we enjoy it immensely. They then play two classics to finish off the concert - Roll Over Beethoven and Don’t Bring me Down.

This last one is sheer ecstasy: Kelly makes all the people to sing along; he then let us sing with no music, no support: just Spanish people singing English and getting the rhythm, the very well known verse: "I’ll tell you once more before I get off the floor, don’t bring me down’.

We sang along twice, three times, and Kelly tells us: your singing is fantastic, I thought you did not know the words. But we did, and we do.

Later we waited for them, to obtain their autographs. They were kind and gentle; they looked very serene and signed autographs for everbody who was there.

It was definitively a great show, and we enjoyed it more than we could ever imagine, and that was the feeling of everybody there.

Most people were fans of ELO for many, many years and the empathy between the audience and the band was immediate. The band surprised us with this incredible energy and vitality.

All the instruments matched the rhythm without any fissure, and mostly the violin of Mik reminded us of the pure ELO sound.

Now we can only dream about their next performance here in Madrid.

But I will not forget this night.

More details can be viewed at -  http://www.ya.com/veranosdelavilla/elo.htm

For more photos and a review (in Spanish), visit the Photomusik Magazine Website at - http://www.photomusik.com . 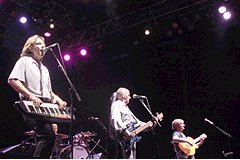 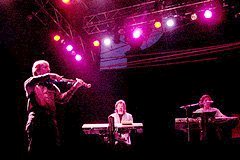 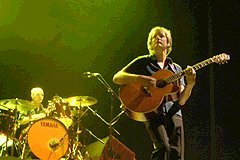 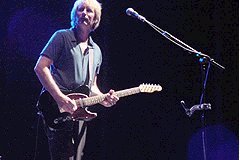