Hello and welcome to my website. First, let me introduce myself. My name is Jim Hoban, I am 56 years old and I live in a city called Carlisle which is in Cumbria, England. Carlisle is in the far north of England on the border with Scotland, very close to the Solway Firth to the west, and the beautiful Lake District just 10 miles from here to the south. I am married to Susan and we have two children - Emma and Ben.

My interest in the Electric Light Orchestra began in about 1976 when I first heard the superb Rockaria! being played on the radio. I immediately went out and bought this record along with the lp it was from, A New World Record.

This also marked the point where I began buying records regularly - I am still buying all sorts of music to this day. My record collection including such a wide selection of different musical tastes, that most people who see my record collection cannot understand how I can possibly like so many different styles. For example my favourite artists (with the exception of ELO and related groups) include Killing Joke, Oasis, Sex Pistols, The Stranglers, Jean-Michel Jarre, Rah Band and too many others to mention. 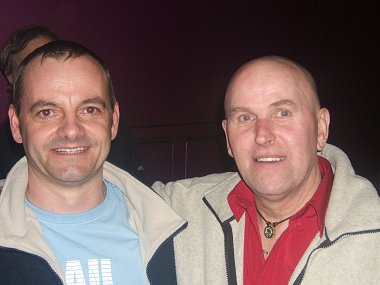 Me & Kelly Groucutt. Manchester 2006.
Since I first bought A New World Record back in 1976, I have steadily built up my collection , buying all of the singles and albums released here in the UK. Unfortunately, I never got to see the original ELO perform live (only on video!!). So, when they split up in 1986 I thought that was it - until a miracle happened in 1990 and Bev, Mik, Kelly and the boys regrouped as ELO Part 2 (without Jeff Lynne of course).

I was not too sure what the 'new' band were going to be like but I bought their new album and single Honest Men, both of which I personally thought were excellent and with a bit of trepidation set out to see the band perform live at the Newcastle City Hall in late 1992. I need not have worried - considering this was the first time that I had heard any ELO material played live, the performance was superb, the band playing classic ELO tracks along with the new lp tracks.

Since 1992, I have seen the various incarnations of the group over 20 times, including twice here in Carlisle. My favourite concert prior to the 1999 tour was at the Blackpool Pleasure Beach Arena in October 1997 - the perfect performance and excellent crowd participation. But even this could not be compared to the stunning performance with the Royal Philharmonic Concert Orchestra at The Royal Albert Hall in May 1999 - an absolutely unforgettable performance which I and 8,000 others will long remember. 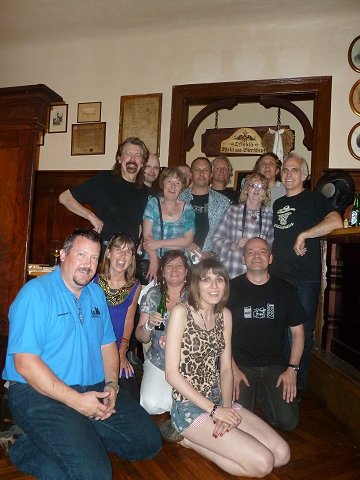 After the gig in Purkersdorf, nr Vienna, Austria. June 2012.
Since 1999, after Bev Bevan 'disbanded' ELO Part II, I have followed with great interest the rest of the band who continue to perform as The Orchestra (featuring former members of E.L.O. & Electric Light Orchestra Part II). They have continued to perform worldwide and after a short U.K. tour in 2001, returning in 2006 for a highly successful sell-out U.K. tour. This has been followed by Spring and Autumn 2008 U.K. shows featuring Phil Bates who has returned to the band after the departure of Parthenon Huxley in late 2007.

Following the tragic loss of Kelly Groucutt who passed away in February 2009, the band decided to continue with the addition of Glen Burtnik as bassist & vocalist and have since had two highly successful U.K. Spring and Autumn 2009 tours. Fortunately I was able to travel to see the band perform in Purkersdorf, Vienna, Austria in June 2012 for an amazing gig and a weekend I will never forget with sightseeing around the beautiful city of Vienna and then watching the bands' sound-check and fantastic concert which was also broadcast live on national radio throughout Austria, Germany and Italy.

In 2013 I managed to see the band 3 times, firstly at the Grassington Festival, North Yorkshire in June, again at the Rewind Festival, Henley-On-Thames in August in front of 20,000 fans and then for a third time at the Kongressove Centrum, Prague, Czech Republic at the start of the guys Eastern European tour and featured the backing of the Prague Symphony Orchestra.

Also seen the band in 2014 in Sheffield and in 2015 at Rewind Scotland Festival and then a trip over to Krakow, Poland to see a great gig at ICE Krakow, a stunning new venue in this lovely Polish city. I have also seen the band perform in Valencia, Spain in July 2016 in scorching temperatures, averaging 36 degrees in the shade!! In 2017, we travelled to Lahti, Finland to see the band headline the Lahden Yot Festival, in 2018 back at the Rewind Festival in Henley and in March 2019 a fabulous trip to Lucerne, Switzerland where the band appeared at the Retro festival in the stunning 5-star Hotel Schweizerhof overlooking Lake Lucerne. 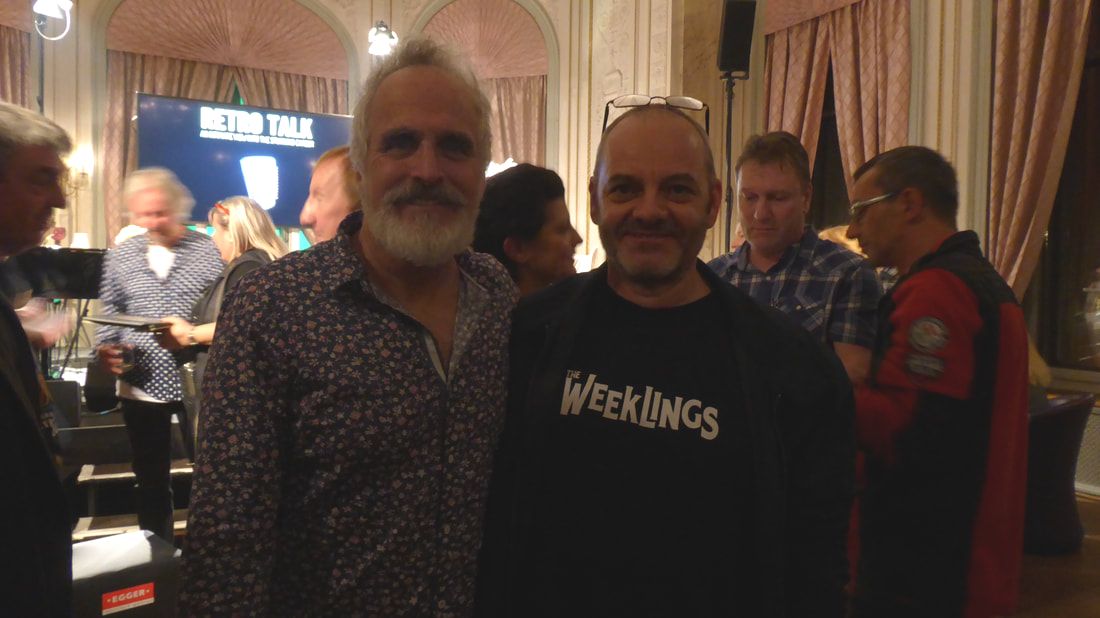 Myself and Glen Burtnik at the Hotel Schweizerhof, Lucerne, Switzerland March 2019.
On 11th May 2009 I was at the Robin 2 in Bilston for 'An Evening Without Kelly Groucutt' which was a concert organised by Kelly's family to celebrate the life of Kelly and featured many artists, including Kellys children and their cousins. It was a fitting send-off for such a kind, happy and 'unique' person. Kellys family also arranged for a Blue Plaque to be erected on the former family home of Kelly in Coseley, followed by a concert in Newhampton in March 2015 which I was also fortunate to attend.

After many years of waiting I also have seen Jeff Lynne's ELO live at Liverpool Echo Arena and Newcastle Metro Radio Arena during April 2016. An amazing lighting and technical production, and so great to see and hear Jeff on stage again alongside Richard Tandy on keyboards. I have also seen the band in 2017 in Sheffield and in 2018 in Newcastle and Vienna, Austria.
​
My ELO collection has also built up over the years including many items I would never have found without the Internet. This has enabled me to make contact with many fellow ELO fans throughout the world and through them have obtained many rare live performances on cd and video. It has also opened my eyes to all of the members and ex-members of ELO and their related groups - including Orkestra, The Move, Idle Race, Roy Wood etc.

I hope you enjoy having a look around my pages and please e-mail me with any comments - good or bad, or any requests or questions you may have regarding E.L.O. 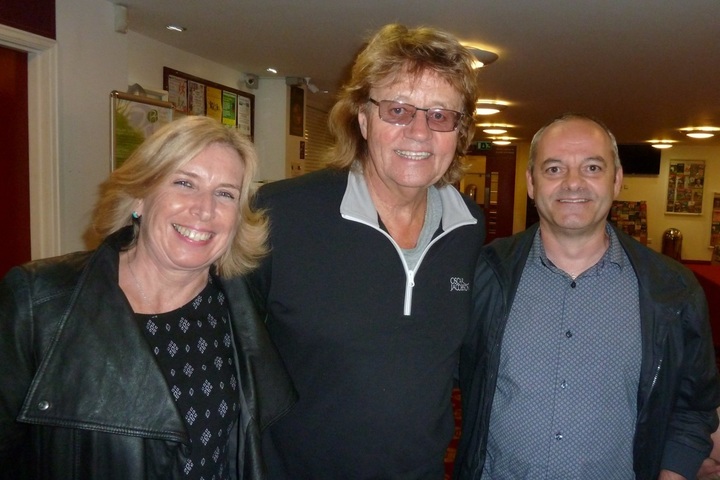 Me and Sue with Bev Bevan after the Bev Bevan Zing Band gig at the Palace Theatre, Redditch. 29th October 2016 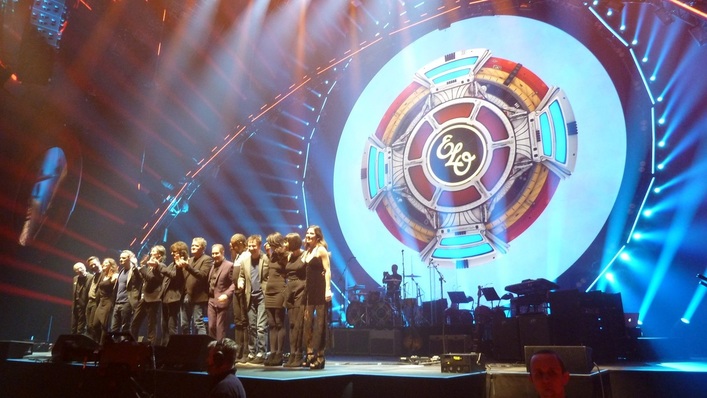 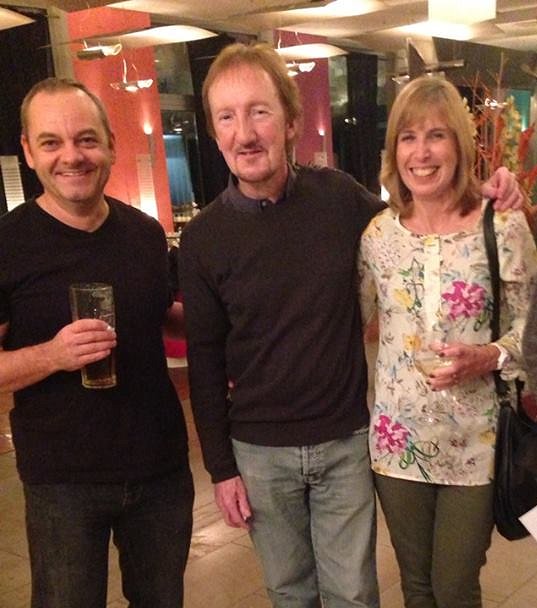 Me, Sue and Mik Kaminski after the gig in Prague, Czech Republic. November 2013. (Photo by Alex Day). 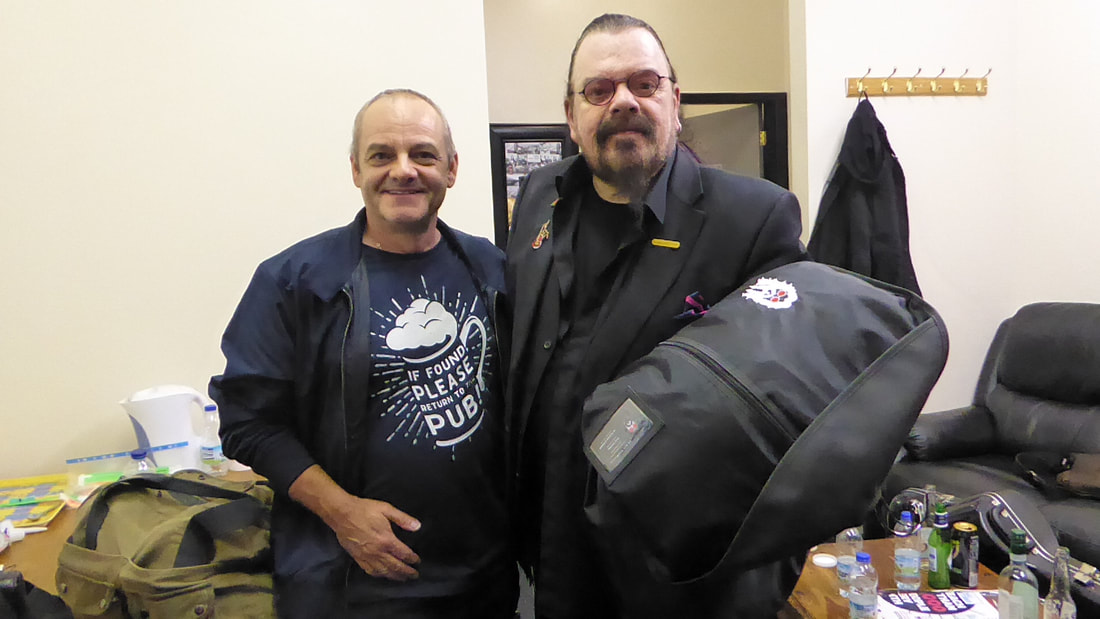